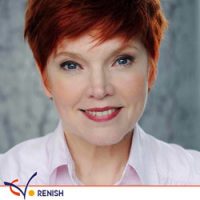 In May I had the honor of playing the role of a nurse in the international feature film, “55 Steps”, starring Hillary Swank and Helen Bonham Carter under the direction of Bille August. It was a small role, but directly working with Hillary Swank which was amazing! What a warm, caring, kind woman, and a fabulous actress!

On January 20 was the premiere of the Dortmund WAM student Abschluss thriller, “Myrielle”,  directed by Miranda Schley, where I played the role of Vivian.

At the end of January was the official public premiere of the new, Koeln, gay web series, “KUNTERGRAU”, where I played the role of the crazy, loving, cool, Oma Margarethe, directed by Kai Kreuser (International Filmschule Koeln). The first season was such a hit, that they crowd funded Season 2 which will began shooting in mid August.

In 2015 in Madrid, I shot a few episodes of a Nickelodeon 3-part mini-series called “Lost in the West” directed by Carols Gonzalez. It aired in the USA in May. I played the role of the teacher, Mrs. Cole in episodes 1 & 3. It aired in Germany and other European countries this month.

A few years ago I shot an episode of the German/Australian co-production “In Your Dreams” (Sommer deines Lebens) in Hannover, directed by Ralph Strasser. It was aired in Germany on July 1 this year . I played the role of the mysterious American Woman.

In 2014 I was in India for 3 weeks working on a debut film of the Dortmund writer/director, Marvin Litwak called “PAWO”. Besides being the acting coach for the main cast, I also played a small role of a journalist. The film had it’s international debut at the Palm Springs International Film Festival and was nominated for Best Feature. Since then it has won Gold and Platinum awards at the International Independent Film Awards and has been nominated for Best Film at the I Will Tell Film Festival in London. The film is about the fight for freedom of the Tibetan people under the occupation of China in their own country. It is based on the true story of a young, exiled Tibetan living in New Dehli.  https://pawomovie.com/

In February this year was the official release of the student Abschlussfilm, “Rueckrundenstart” from writer/director Christoph Bauer from the Fachhochschule Dortmund. I played the role of a Moenchengladbach Politesse IN Dortmund.

In March I was back on the stage at the International Theater in Frankfurt with my solo show, “A Lost American in Germany”, to a fantastic audience. This is the 5th year of the show. I will also be performing the show for the first time in Bonn, on September 17 and October 29, 2016 starting at 8:00 p.m. at the Euro Theater Central Bonn.

I’ve been cast as Martha in Edward Albee’s challenging drama, “Who’s Afraid of Virginia Woolf”, which will be presented in English under the direction of Marianne de Pury at the Euro Theater Central Bonn. Premiere will be March 2017.

I’ve always wanted to do this play and role and I’m honored to have the opportunity.

I had the pleasure of being an English voice for the upcoming documentary film, “Shot in the Dark”, a documentary about three blind photographers: Pete Eckert, Sonia Soberats and Bruce Hall, who devote their lives to creating images.

I just finished recording the voice for a sweet, 3D, children’s animation feature film called “Marnie”s World”. It will be in the cinema’s in the spring of 2018.

In 2015 I recorded my first APP! It was for a “personal Planitarium” APP called “Universe2Go”. If you’re an astrology or Greek mythology fan, this is the APP for you!

In addition to these speaking projects I mentioned, I worked on a number of industrial/image films, e-learning projects and some commercial spots.

I also managed to find time to work with one of my favorite acting coaches, Mel Churcher from London, on improving my skills at self-taping auditions.

2016 has been an amazing year so far and I’m looking forward to whatever professional opportunities come my way in the next months.